A workflow for making and testing changes to your Ship application.

Get Started With Ship

Part 4 Of A Series

This is part 4 of a guide that walks through creating a sample application in Replicated Ship. If you haven’t followed the previous sections of this guide, go back to deploying an application before following this guide.

Now that you’ve run through your first installation, its time to get a feel for what updates feel like. This will take two steps:

For this example, we’ll add some custom messaging to our end customer’s workflow to explain the prerequisites for our example application. To update the release, head over to Ship Releases, and create a new release:

Since releases are immutable, this creates a new “Draft” on the channel, which we can promote when we’re ready. Lets update the lifecycle section to include a page with the app version and release notes. We’ll add the following message step in between the first and second steps:

Your entire lifecycle should look like the example here.

Once you’ve updated your YAML, you can promote a new release, give it a version of 0.2.0, and add some release notes: 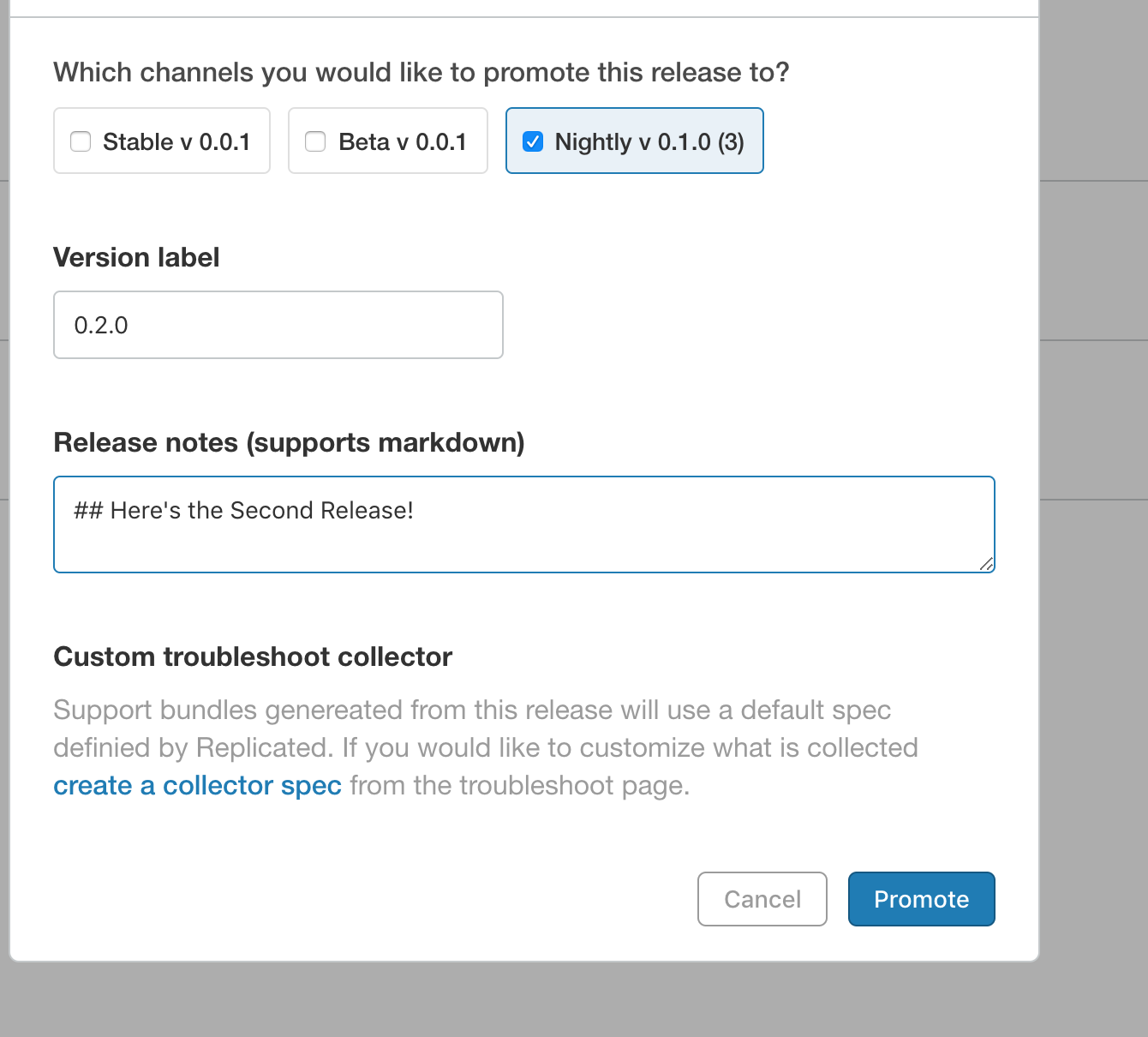 This makes use of the Installation template function to inject metadata about the application release. To learn more, you can review the metadata fields available.

Next, lets pull the updated release using ship update. This will assume you’ve already been through the instructions in Testing the installation, and that you have an existing .ship/state.json in your working directory.

If don’t have a .ship/state.json from the previous step, or if you just want to start from scratch, then you can re-run the same ship init command from Testing the installation, and skip ahead to headless updates.

Remove the installer directory, but leave .ship in place.

Then run the update:

And you’ll see a similar prompt as in the initial installation. Walking through the installer, you should see your new message step reflected in the UI:

By default ship update will do a headless update, but we use the --headed flag above so we can see our changes reflected in the UI.

When iterating on your application assets, you can usually move more quickly by skipping the UI, and running headless updates.

If you’d like, you can experiment with making changes to the the Kubernetes YAML in your release YAML, and seeing updates reflected in the installer/k8s directory after a headless update. Again, to do an update with the UI, you can use

Now that we have a feel for how managing releases works, its time to get set up with a ship development environment for offline iteration or deliver a private image with ship.